I would like to pay tribute to a wonderful man, Ernest Arthur Willett.  Known as Joe to the family and Eddie to anyone in the fire brigade!  To me he was Dad, but I mostly called him Joe.   He also goes by the name of Grandad and Pops, as he has two grandchildren and three great grandchildren, one of whom, Austin Ernest, will carry on that little used but important name in our family.

So where to start with a man with so many names but with one love, his family and friends?

Joe born in Bishop’s Stortford on 090929 - which is how he reeled it off.  He was one of seven children born to William and Dorothy.  He left home when he was 15 to train as a Cabin Steward.  He then acquired a position on a ship called the Dominion Monarch and travelled the world, only coming home very rarely.

On one of the trips home, he met June, who worked in Woollies in Bishop’s Stortford.  They hit it off and kept in touch until he left the Dominion Monarch and came home for good.

I also know during this time Joe had a Panther motorcycle, which I also know he dropped with June on the back in North Street Bishop’s Stortford.  Joe was probably not popular that day, but they married in August 1952

This year would have been their 70th Wedding Anniversary.

After their wedding, Joe and June moved to Sawbridgeworth.  At this point, Joe trained and subsequently became a fireman, initially in Dagenham for a while.  He was then stationed at Harlow which enabled them to obtain a council house in Harlow which they moved into in about 1956.  June was still working at the Snap factory in Bishop’s Stortford, so life was good for them both.

Then came me in 1958.  June gave up work to look after me and Joe as he was on shift.  Back then the shifts were two days, two nights and then two days off.

Joe found additional work on his two days off and on the days of the two nights (they had beds at the fire station), working for Reeds Removals of Sawbridgeworth.

During this time while I was growing up, Joe made some lifelong friends in the fire brigade most of whom are no longer with us, but I have to say they were the most wonderful group you could ever wish to meet always there to help each other with jobs on cars, houses, you name it one of them probably did it before becoming a fireman.

I remember one morning probably 10 of them turned up at June and Joes' bungalow at 8am, built a vehicle bridge over the stream in front of their bungalow and dug out the driveway up to the bungalow in one weekend.  They also always put on wonderful Christmas parties for all the kids in the station bays.

There also were the fishing trips which Joe used to enjoy going on, all arranged by the firemen.

June went back to work when I was 5 or 6.  Joe by this time was a leading fireman and was still keeping a second job.  One funny thing I can remember around this time, was going on holiday to The Sunshine Holiday Camp Hayling Island and Joe entering the fancy dress competition with a couple of the other dads, wearing bright yellow tutu’s they were wearing prancing about on stage. Very funny.  We also went on our first holiday to Spain in 1969.

Joe also liked a car having had quite a few by this time, a couple I can remember are a Ford Consul, Ford Classic, Ford Corsa and a Vauxhall Viva, which I remember got a puncture after he had had it about three weeks, it was chucking it down and I remember Joe got soaked!  When he got back in the car he said to June, ‘that’s it it’s going’.

Joe had a few cars and as a family we would a few times a year go to banger and hot rod meetings.

Joe and June had a great social life.  They both came from large families and stayed in touch with most of them throughout their lives.  Joe and June then moved to Sawbridgeworth for the second time.  They purchased the bungalow where they lived for 43 years.

During this time, Joe became a Fire Prevention Officer so no more shifts.  Days only until he retired from the fire service aged about 56/57 having done 25 years’ service as a fireman.

June was still working so Joe came to work with me for a few years until June retired.

They then travelled all over America and Canada several times and, strange as it may seem, loved Benidorm so visited on many occasions.  They also quite often travelled with friends,  Margaret who used to be a neighbour in Harlow I know went with them on one occasion to America, and Joe told me the story of them getting a puncture in the desert somewhere, and one of them, I think June flagging down a car and getting a lift to the nearest  town with the wheel, (as the spare was also flat), to get it sorted so they could continue their road trip. I suspect Joe and Margaret just passed the time laughing with each other.

They also by this time had grandchildren coming along, Karl and then Alisa, and they loved being grandparents and the grandchildren loved spending time with them,

Joe would make ramps for their bikes to jump over, built a work bench with a vice on for them to work on as he did, took them out for days, had sleep overs, went on walks, you name it Joe and June loved it.

June was Joe’s world, his soul mate, his best friend and when June started to become more affected by Parkinson’s, Joe just stepped up and did more, never moaned or complained, just got with it.  As June deteriorated, Joe needed some help, but he cared for June 24hrs a day for a few years, until June had to go into a care home as it was just too much for Joe.  He was not happy about this but understood.  So, Joe in his normal way then just went every day, rain or shine – and I mean every day, to see June, spent the whole day with her and helped care for her.  This lasted for 18 months -  he never missed one single day.

After losing June Joe did struggle sometimes to see why he should continue, he struggled with being on his own.  So I chatted to him about having a holiday and we found a company specifically doing them for older single travellers.  Joe booked one and off he went.  Well, when he came home he was full of it, absolutely loved it and even, according to Joe, sang them all a song on the last night.  I dread to think how that went!  But he made some more friends and they then all booked together and off they went.

But Joe's main problem was living on his own, so we looked about and found Hawthorns in Braintree.  Joe took a bit of convincing but eventually after 12 months decided to give it a go.  Well that was it normal Joe returned, he made new friends had days out, entertainment evenings, cheese and wine nights, cinema nights, he loved it and left a lasting impression on residents and staff alike.

Unfortunately about this time, we became aware of Joe’s Kidney problems.  We went to see a specialist and discovered how far down the line Joe was with his declining kidney function and that he also had leaky heart valve.  We came out and Joe says, ‘Oh well, It will be what it will be’, and carried on as normal.  From then on we always went with Joe to every appointment, but to Joe it was just a check-up and he would carry on as normal.

Eventually it started to take its toll on Joe, but he just slowed up to accommodate it and carried on.

He did move one last time to the Grange Care Home about a year ago, as we and Joe knew the finish line was in sight, but he still carried on as best he could, he even started to inspect the care home building on a weekly basis for any fire hazards and give recommendations to the management, again he made a lasting impression on resident’s and staff alike they all loved him.  I know I am not alone in saying the world is a strange place for me without Joe in it.  He was ever sad always happy and bright.  He lived for 92 years but left his mark for a lifetime.  Rest in peace Ernest, Eddie, Joe, Dad.  We miss you already. 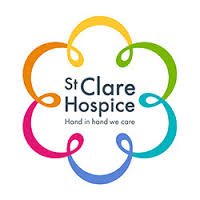 The work of St Clare is about helping those affected by life-limiting illnesses to have the best quality of life.

The Firefighters Charity are the UK's leading provider of services that enhance quality of life for serving and retired firefighters, fire personnel and their families. Their vision is to make a positive difference by supporting people in the fire and rescue community when they are in need. Over the years, they have helped hundreds of thousands of individuals by providing world-class treatment and support services.

In memory and thanks for the life of my happy, forever up-beat uncle who was always smiling.

A one in a million Brother, we will miss your good natured banter and we will never forget your happy smiling face. We will meet again and share happy memories Miss you loads Brother

Rest in Peace dear Joe. Sadly missed but you will never be forgotten 💔 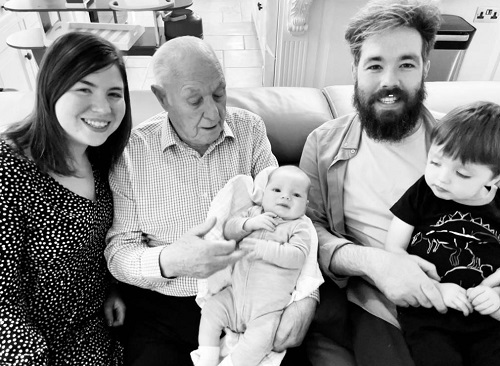 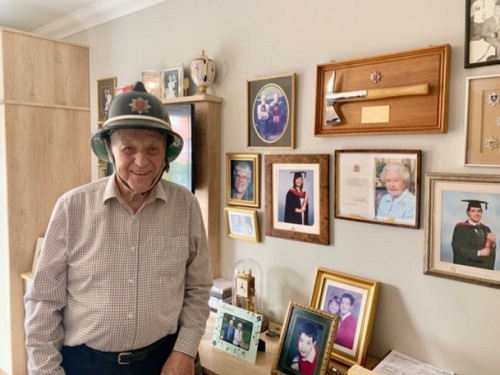